Is a Master's Degree Worth It?

The COVID-19 pandemic has brought major changes to the job market and economy over the past year. Millions of people are out of work, seeking new professional roles, and considering going back to school to earn higher credentials.

A survey done by the Strada Education Network in June found that around 35% of American adults plan to start an education program in the next year, and those who already have a degree are more likely to enroll.

Given that tuition and fees for graduate programs cost $12,000 to $28,000 per year, it's essential for prospective students to know if earning a master's degree will pay off. To assess which master's degrees have the highest impact on salary in the year after graduation, we compared median salaries for bachelor's and master's degree holders across 193 fields of study.

We used data from the U.S. Department of Education's resource, College Scorecard, to compare median salaries for bachelor's degrees and master's degrees in the same field of study. College Scorecard collects salary data on more than 5 million college graduates who received federal financial aid, including student loans. These data points are gathered one year after individuals complete their degree program and come from tax records and wages reported to the IRS.

In order to ensure we had a representative sample, we only included degrees that had salary information from 10 or more schools for both bachelor's and master's programs.

Overall, postgraduate degrees in specialized healthcare, science, engineering, and business had the highest payoff. These degrees may be more highly paid at the master's level in part because they are relevant to jobs in high demand that require technical knowledge and skills that are difficult to learn and verify without a degree program.

Master's degree-holders who studied real estate saw the highest salary boost during their first year in the workforce. The median salary jumped from $50,302 at the bachelor's level to $91,744 at the master's level, an increase of $41,422 per year that put alumni less than $9,000 away from a six-figure salary in their first year after graduation. This finding is particularly surprising because a degree is not required to work in real estate.

Median salaries for systems engineering degrees had the second-highest increase, jumping $36,358 from $66,077 at the bachelor's level to $102,435 at the master's level. Median salaries for those who held master's degrees in communication disorders sciences and services were more than double the median salary for a bachelor's degree in the field, with an increase of $29,854. This category includes programs in speech-language pathology and other communication disorders. The significant boost in salary is likely related to industry certification standards set by the American Speech-Language-Hearing Association (ASHA), which requires a master's degree for speech-language pathology certification. 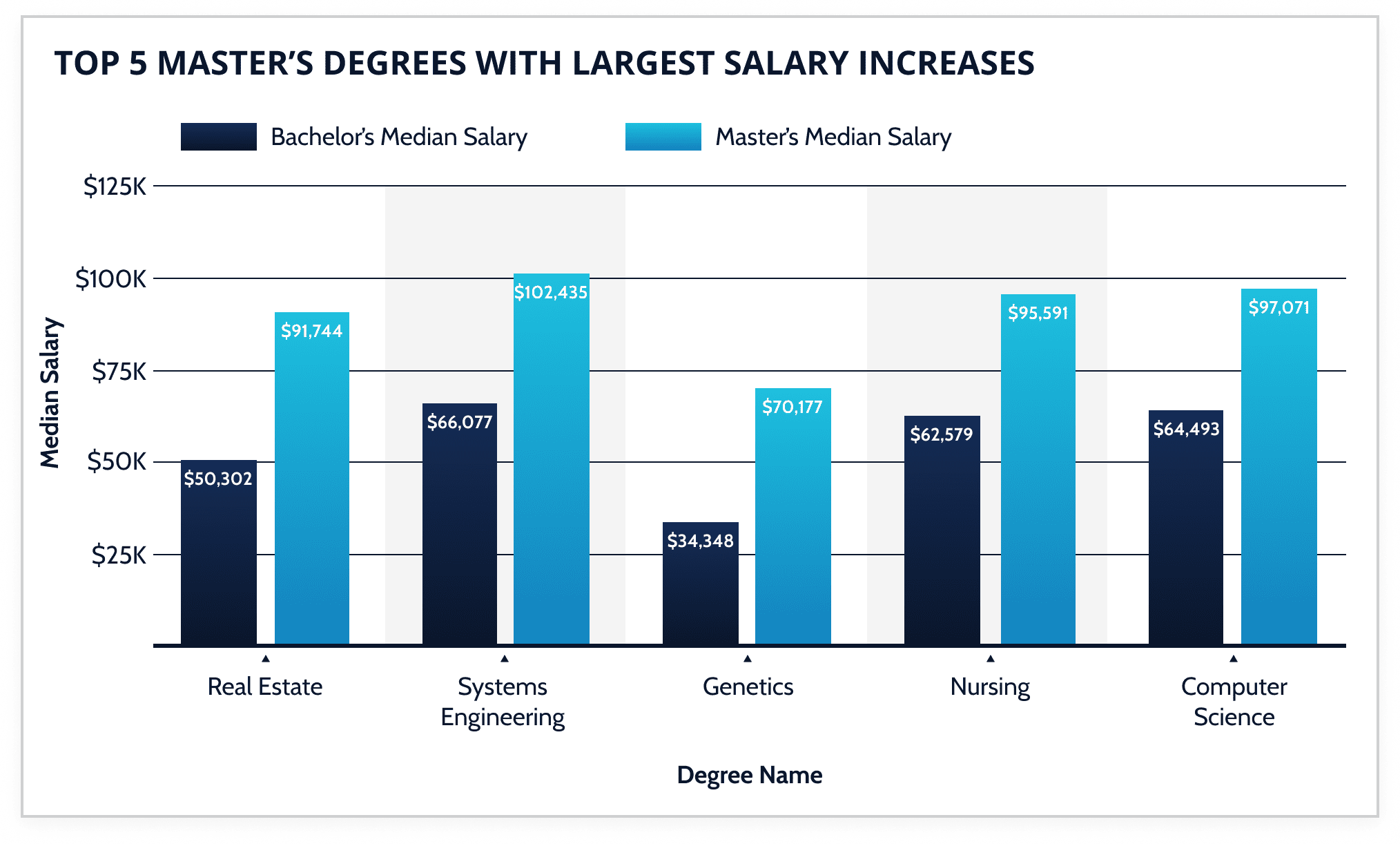 WHICH MASTER'S DEGREES HAVE THE SMALLEST SALARY INCREASES?

Degrees in arts, communications, and other fields that often lead to freelance work or self-employment offered the least financial incentive to go to graduate school.

Advanced music degrees had the lowest salary growth, coming out to a $2,946 increase for median salaries from the bachelor's level to the master's level. Fine and studio arts majors saw the second-lowest increase in pay, with a median salary increase of $3,718 from the bachelor's to the master's level. Both fields offer limited avenues for high-paying jobs.

Graduates in these fields likely don't financially benefit from advanced degrees because their careers are often based on projects, skills, and experience that can be developed and verified without formal education. Self-employment and freelance work are also more common in these fields, and salaries can vary based on personal pricing, quality of work, and product demand.

Master's degrees in clinical laboratory science, research, and allied professions also resulted in minimal salary growth, with a 12% increase from the bachelor's to the master's level. This degree category includes programs for phlebotomists, hematology technicians, blood bank technology specialists, dialysis technologists, and medical laboratory technicians. Most entry-level positions in these fields only require the completion of a certificate program or associate degree.

While the cost and financial benefit of graduate school are significant factors for many people, there are other reasons to pursue a master's degree, even if it won't raise your salary much. Here are some other factors that should be taken into account when considering graduate school:

Whether or not your career goals require a master's degree. For some positions, such as social workers or guidance counselors, a master's degree is necessary for licensure or certification. Other roles require a master's degree but do not involve licensure. While the financial benefit may be limited in these positions, students still have to pursue postgraduate education to work in the field.
Some people also earn a master's degree in a different field than their bachelor's degree for personal interests, to make a career change, or to create a specialized skill set. For example, pairing a degree in sociology with a master's in public administration may better prepare someone to work in the public sector. While salary increase would likely not be a driving factor, the job security and benefits of working for the government could draw prospective students.
Some master's graduates may not earn a significantly higher salary right away, but could see a financial payoff later in their career. College Scorecard only gathers salary data for graduates one year after they've finished their program, which does not account for the potential salary growth an advanced degree can lead to further down the road.

HOW THIS INFORMATION CAN HELP INCREASE SALARY AND MINIMIZE DEBT

Understanding the impact an advanced degree will have on your near-term salary when considering graduate school is a critical component in making decisions about the future.

Some master's degrees can significantly increase earning potential, while others are not as likely to pay off in the near future for graduates. This is especially important to consider for those who will be balancing student loan payments on top of other expenses shortly after completing their program.

Nevertheless, students can still be financially successful while pursuing their interests. Our rankings lists are a useful tool to compare tuition rates, average student debt, and median graduate salaries for specific schools and programs to maximize earning potential and minimize future debt.