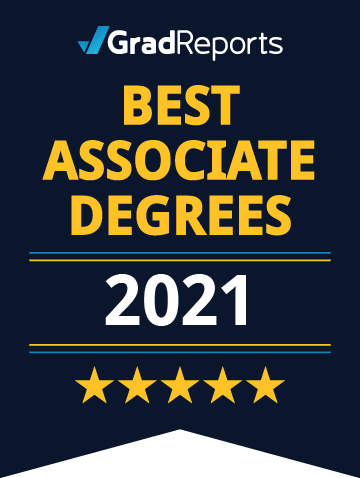 2021 Best Colleges for an Associate Degree by Salary Score

Every year, students across the country enroll in associate degree programs to advance their careers and earn higher salaries. To help students maximize their investment in higher education, we’ve created a comprehensive ranking list that highlights schools whose alumni earn higher salaries overall. We rank schools by our proprietary Salary Score based on alumni earnings in the first year after graduation. The scores reflect how much alumni make compared to alumni of the same programs at other colleges, and take into account student enrollment in each program. These rankings are intended to highlight strong colleges that prepare students for a high-paying career, regardless of their major. Each of the schools on our rankings list must offer and provide data for at least five associate programs. Read our methodology to learn more.

After evaluating alumni salaries at the associate degree level at nearly 700 community colleges, technical colleges, and other institutions, we found that 87% of the top 100 schools are public colleges. California graduates performed especially well, with eight of the top 25 colleges located in California.

Associate degrees are a popular option for adult learners looking to earn their first credential, students with specific career goals, or students who want to save money, either on their degree or the first two years of their undergraduate education.

What are the top five states for an associate degree?

The top five states for alumni salaries at the associate level are Hawaii, New Hampshire, California, Minnesota, and Connecticut. Many graduates, especially those in community and technical colleges, attend school in the state where they live and work. We found that states with a higher cost of living generally had higher graduate salaries.

As the most expensive state to live in, it’s no surprise that Hawaii has the highest median alumni salaries overall for those who earn associate degrees. However, Hawaii did not rank in the top five states at the bachelor’s or master’s levels.

The second-highest median graduate salaries came from schools in New Hampshire, which may be surprising considering that the state’s cost of living is just over the national average. California, the state with the third-highest cost of living, was also ranked third for alumni salary, with a median Salary Score of 72.11.

While living expenses in Minnesota represent the national average, the state had the fourth-highest alumni salaries for associate degree holders. Connecticut came in fifth for alumni earnings and is the ninth most expensive state in the country.

Schools with lower salary scores were generally located in Southern states with a lower cost of living, which is likely why graduates from these schools were often paid less.

What are the best private colleges for associate degrees based on Salary Score?

Most notably, the top five private colleges based on associate Salary Score all offer established online programs. These programs are often geared towards working adults with a focus on flexibility and affordability.

Indiana Wesleyan University (IWU) held the top spot for private schools at the associate level, with a salary score of 96.6. IWU is a Christian university and offers a range of online and in-person Associate of Science programs. The school serves 13,285 students both online and on several campuses in Indiana, Ohio, and Kentucky.

Columbia Southern University (CSU) and the American Public University System (APUS) came in second and third for private schools. Both are for-profit private institutions, which may be surprising considering the stigma surrounding for-profit schools.

For-profit institutions have long been associated with poor student outcomes, including low completion rates and high loan default rates. However, they’re often more flexible and offer short-term options that appeal to working adults. These rankings can be used to identify schools whose alumni earn higher salaries for those interested in attending for-profit institutions. Other factors such as graduation rates, academic and career support, and accreditation should also be considered when evaluating education options.

APUS includes two fully online schools: the American Military University, which is geared towards military members, veterans, and their families, and the American Public University. Both schools primarily serve working adults. Together, the schools serve more than 86,000 students.

Columbia College came in fourth for private schools with a Salary Score of 92.29. Nearly 40,000 students are enrolled online and in person at more than 30 campus locations nationwide.

Southern New Hampshire University Online (SNHU) was ranked fifth for private institutions, with a Salary Score of 90.51. This private nonprofit school is well known for its robust presence in the online education space and serves more than 135,000 students online.

How do salary scores stack up in terms of public, private, and for-profit?